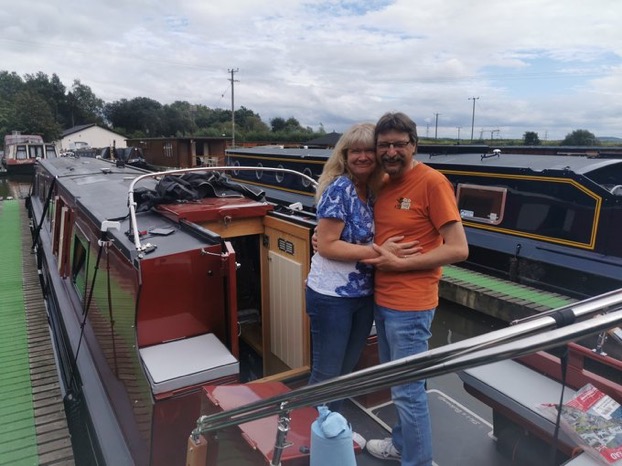 It was 11.45 am. There we were, waiting at the entrance to St Mary’s Marina, Rufford. We heard something heavy driving down the road. And there she was, our new home, narrowboat Beau Romer, perched high up on the transporter. There were tears in my eyes – the one thing I swore wouldn’t happen. The feeling when something you’ve dreamed of, plotted and planned for over 7 years is actually happening in front of you is hard to describe.

We wandered down to the slipway, trying to look all casual and nonchalant and met up with the gang from Bickerstaffe, Kev, Sue, Ryan and Rob. The transporter backed down the slope and steered into position under the crane. Then the slings went on and everything was ready for the lift. The crane took the strain, the lorry drove out from under her and Beau Romer, with all our possessions onboard was hanging suspended in mid-air. This was the moment everyone worries about, but it was fine, she was perfectly balanced. The crane swivelled her around and slowly lowered her into the water. The nerves kicked in again. Would she float? Of course, everything was ok. She sat sweetly on the water as the guys swarmed all over her, checking for leaks, looking for bubbles. Ryan took her out into the marina, performed a few manoeuvres and she was good. Kev was smiling.

We drank Bucks Fizz to celebrate. She was and is beautiful. She changed colour as the light played with her paintwork, from red to brown, through russet to orange. Just for a moment the sun emerged from behind the clouds, and she shimmered.

They left us to the organising, hunting through the cupboards for the things we’d just thrown in. We’d planned to get a takeaway for dinner, but neither of us wanted to leave the boat. So our first dinner on board was cheesy beans on toast topped with a poached egg, washed down with a nice bottle of Barolo.

Later I sat on the bow as the twilight fell. The marina lights came on, the water was calm and still, apart from one solitary duck meandering about. I noticed the reflections in the water and the way the evening light struck the paintwork until Beau Romer glowed. And I thought to myself, what a wonderful day.